Snippets of my Life

Hey there
I’ve been getting a lot of messages, emails and comments from my YouTube subscribers asking if I’m ok here in Queensland due to all the flooding and I’d just like to let you know that yes I am, we only had minimal flooding where I am but thanks for your concern and although I’m not directly affected by this, in a way I am because there are people I know who were in these floods and were trapped in their areas and I also think that something of this magnitude affects all Australians. As most of my Australian subscribers may know, about 75% of Queensland was flooded and parts of NSW and there is also flooding in Melbourne but it does seem that the water levels are now starting to drop, there are so many terrible stories I hear but the Australian way is to stick together and lend a hand.
Thousands of people have lost everything in these floods and I was going to suggest donating items to a charity for the flood victims but I’ve heard that the authorities are asking that no more ‘physical’ donations be sent at this time because they need money donations much more urgently, they will eventually need more clothing and bedding but money is something that will get things up and running again quickly. The clean up after flooding is a HUGE job that has to be done as quickly as possible to help prevent diseases and to get communities up and running again, thousands of people are volunteering for this task in Queensland alone. There’s a fund that has been set up for donations by the Government and various ways which you can donate. Oh and I’m pretty sure the RSPCA are in need of donations for the animals, many people had to leave their pets behind and there are large numbers of cattle also in need of care so if you can help in any way it would be great.
Now I know not everyone can afford to donate money so if this is the case, please - send your thoughts and prayers to all those in need, to all those that are lost and to all those that have lost loved ones, it would be really appreciated.
Thankyou and take care
--------------------
Premier's Disaster Relief Appeal
Donations can be made at: http://www.qld.gov.au/floods/donate.html or by calling 1800 219 028 or at a branch of:
- Bank of Queensland,
- Commonwealth Bank,
- Westpac,
- ANZ,
- NAB, or
- Suncorp
and cheques can also be made out to the Premier's Disaster Relief Appeal.
Electronic bank transfer donations are also being accepted. Just use the following account details:
Account name: Premier's Disaster Relief Appeal
BSB: 064 013
Account number: 1000 6800
RSPCA: https://donate.rspcaqld.org.au/flood
St Vinnie's - Volunteers on the ground in the flood affected areas are reporting that what they really need right now are funds to help these people quickly. There will be time to give gifts of furniture and clothing and other necessities after the water has receded.
2 comments:
Email ThisBlogThis!Share to TwitterShare to FacebookShare to Pinterest

I have just put up a video review on the 'Balmshell' lip products which you can see here: http://www.youtube.com/watch?v=w1mJvqJfn5Q. I was sent these products to try out and received them on Christmas Eve, it was just like an early Christmas gift when I opened up the package because these are possibly the cutest lip glosses I've ever come across, the full size ones have a detachable part which turns into a key chain .... how good is that!!! But not only that each different lip gloss tells a different story by way of a floating illustration (the part you keep for the keychain). They are NOT sticky in any way and the colours work really well (not too pigmented). Then there are the five 'sample size' glosses which are so easy to carry around with you and I actually like the nude coloured one to highlight my cheeks a bit :) The Cheek and Lip Tint/Stain is my absolute favourite, I used 'Gossip Greta' and love it to pieces as it gives off such a natural look to my cheeks and lips.
Products mentioned:
- mini lipgloss pack (5)
- first lipgloss : Ahh.. the Classics
- second lipgloss: Shoe Fetish
- third ligloss: You Give Me Fever
- Cheek and Lip stain: Gossip Greta

Link to where you can buy these and find other cute lip products :)
http://www.balmshell.com/ 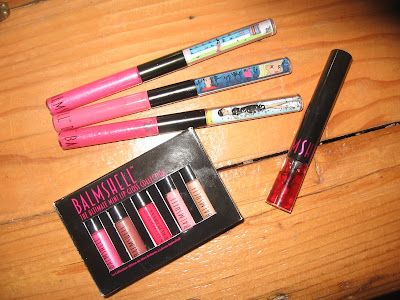 I use 'MODIVA PROFESSIONAL CURLING IRONS' in my Tutorials

I get asked alot where I get certain products which aren't readily available in Australia, these are some online stores that are located in Australia where you can get them.
Makeupnet.com
Tantycosmetics.com
Crushcosmetics.com
For BB Creams try:
HIKOSEN CARA (NZ)
YESSTYLE
MYBBCream